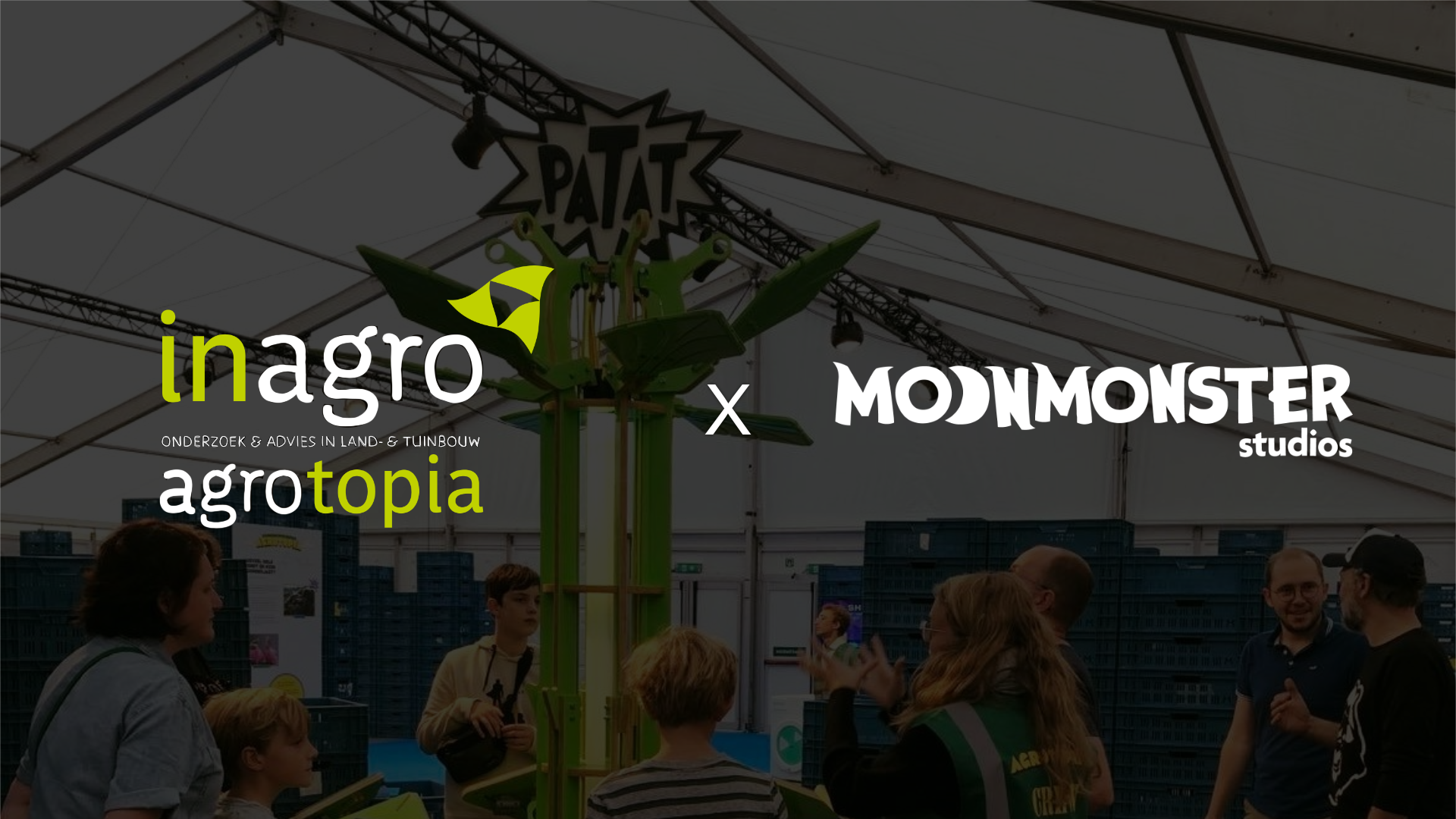 DE PATAT! AN INTERACTIVE EXPERIENCE THAT MERGES THE PHYSICAL AND DIGITAL WORLD.

No better way to celebrate the opening of Agrotopia, the largest greenhouse in Europe, than by growing your own potato. De Patat! lets people experience the challenges of growing potatoes and how innovation in agriculture can help.

This cooperation between Henk Rijckaert and Moonmonster Studios is an excellent example of how games can make complex content more digestible (pun intended).

Agrotopia carries out innovative and practice-oriented research into the greenhouse horticulture of the future and professional urban farming. For its festive opening on September 24, 2021, the Province of West Flanders organized The Festival of the Future, a playful universe with the food and agriculture of the future as the central theme.

Henk Rijckaert, one of the event’s curators, has been passionate about science for many years. With his YouTube channel, the comedian has been posting videos about science, innovation, and technology weekly for over five years.

For Agrotopia, he wanted to develop an interactive video game with both digital and physical aspects.

De Patat! is an interactive video game played by four to six people where the players are responsible for the growth and maintenance of a potato plant. The participants played on the branches of the two-and-a-half-meter-high potato plant.

The game was a great success. Young and old enjoyed participating and learned a few things about the future of potato cultivation in a playful way.

Each participant was responsible for specific tasks per round given by the virtual game master. They had to complete the tasks faster and faster. Since each player had different assignments, communication was crucial to avoid chaos. But sudden problems, like an ant infestation, could make it harder for the players to complete. The plants’ health depended on the team’s timely completion of the tasks.

The goal? Not only let the plant survive and produce potatoes but make it the healthiest one of the day! A high score kept track of which team was best.

The game was a great success. Young and old enjoyed participating and learning about potato cultivation’s future playfully. Mission accomplished!

How did such a creative collaboration go? De Patat! was a project of about four months developed by three people. The first three months were devoted entirely to preparation. Henk took on the scenario, and MoonMonster focused on the game itself. The process went like this:

Preparation or pre-production is a step that needs to be given more attention. It is crucial so that the development can proceed as efficiently as possible and the game can achieve its desired goal. More than simply making a game is required. There is a need for a well-thought-out strategy with a game design that matches the target group. Henk Rijckaert chose MoonMonster Studios, which focuses on entertainment and applied games. The game studio was founded in 2019 by Gilles Vancoillie and Seppe Roelandt with the support of DAE Studios.

Gamification has grown in popularity in recent years due to its proven utility. It increases both the extrinsic and intrinsic motivation of participants. It can ensure that everyday things initially experienced as ‘boring’ can be interesting. De Patat! is an excellent example of gamification, which means using game elements in a non-game context.

Games are no longer solely entertaining but are more involved in everyday life. At DAE Studios, a game incubator, and accelerator, we have seen an enormous increase in requests from companies to develop games with the support of the studios in our network. A trend that will only increase in the coming years.

Has this article piqued your interest, and are you curious about how games can help your business? Do not hesitate to contact us. Let’s brainstorm together around your idea!