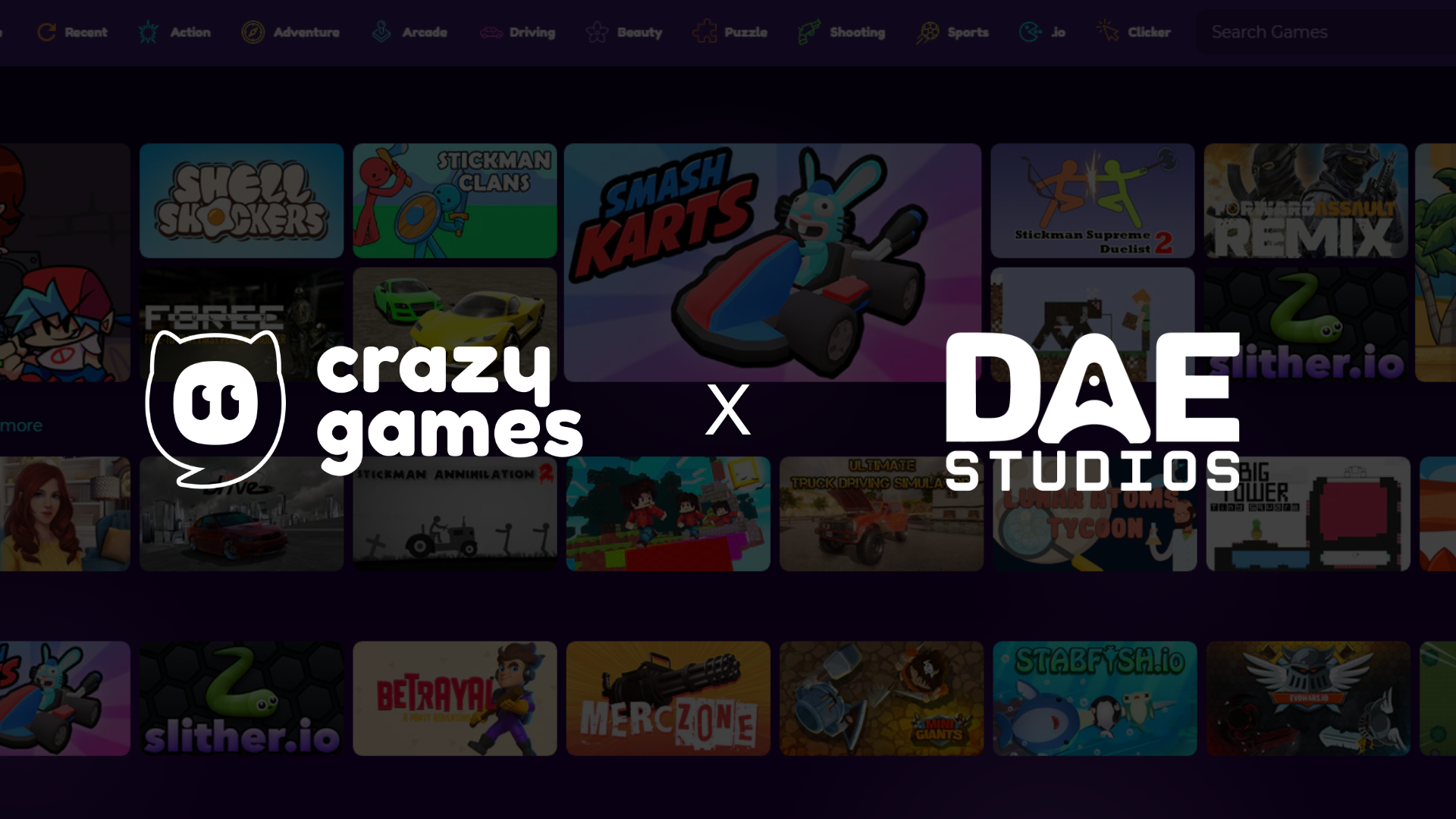 EXPLORING THE POWER OF WEB GAMES WITH CRAZYGAMES

For the last sprint of 2022’s 2 Games a Month, DAE Studios and CrazyGames joined forces. The participants got the chance to create a web game for the portal keeping in mind some requirements: web game compatible with all browsers, fun the second the player presses play, replayable, and targeted towards a young audience. At the end of the sprint, the teams with games that showed the most potential would be supported in bringing their game to the platform. A great way for a studio to gain some experience and exposure!

We’re proud to announce that two games made during 2 Games a month were published on CrazyGames! Before going over these games, it might be interesting to look at the structure of such a game sprint!

A look behind the scenes

The participants of the 2 Games a Month program are prepared to do as much work as possible in a smart and efficient way to obtain the best possible results. For the game sprint around CrazyGames, the participants were given two weeks.

Considering the complexity of creating games, this isn’t much. The participants, therefore, had to draw up a strict schedule from the start and had no room to linger.

What does such a production process look like? A sprint typically consists of four parts: Concept ideation, core features, playtesting, and polish.

15 Seconds is a challenging but rewarding tactical turn-based single-player game in which you must complete short missions. Assemble your “dream team” in advance and set out on a mission in hostile territory. A classic formula but with a unique twist. Unlike the classic tactical turn-based games, as the name implies, you must complete your actions in 15 seconds. Less time to decide means you must think faster and more proactively. This makes for intense yet rewarding gameplay if you can complete a mission flawlessly. Oh yes, weapons are one-hit kills, so there is no room for error.

Anaxanthia, consisting of Arne Vandamme and Dries Martens, is one of the most recent studios in the DAE Studios network. It should be noted that Kobe has also contributed to 15 seconds but is not part of Anaxanthia, which will continue to develop and update the game.

15 Seconds is inspired by the popular XCOM game series, which co-founder Arne is a big fan of. He had been toying with the idea of making a game in the genre for a while, and when CrazyGames knocked on the door during 2 Games a Month, Anaxanthia’s team saw the opportunity to bring the idea to life!

15 seconds also has good prospects. The team plans to add new maps and characters, expand the campaign, and implement daily challenges to keep the player base entertained. Right now, players can already compete against each other for high scores to take first place on the leaderboards!

Will you join the fight?

LET’S GOAT is an online multiplayer game in which you play as a goat. The goal is simple: Try to kill yourself within three minutes in all kinds of crazy and funny ways: UFO that beams you up, steal dynamite in your mouth until it explodes, etc. The rest is up to you to find out!

Team3D, which consisted of Thorvald Mortelé, Marnick Huysmans, Ioana Serban, and Robine De Roeck, took inspiration for the concept from the internet hype and the single “Dumb Ways to Die” from 2012, which cites several stupid but funny ways in which you can kill yourself. It sounds darker than it is! The fun concept combined with a multiplayer form in which you can play together online and/or with friends around these hilarious scenes made for a successful game!

The future for LETS GOAT looks bright. The team has great plans for the further course of the game and plans to add many more things. They will organize themed events (E.g., Halloween and Christmas), launch multiple maps, and add dozens of ways to kill yourself!

LET’S GOAT is live on CrazyGames

We proudly announce that CrazyGames will again be a collaborator for the 2023 edition of 2 Games a Month. Our goal is to get even more web games onto the platform with increased quality thanks to the many valuable lessons we have learned during this experimental first collaboration.

GET A TASTE OF MAKING INDIE GAMES

Learn more!
No thanks.